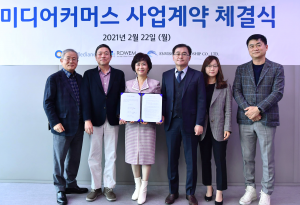 A platform for media commerce focusing on high-quality content, built on the expertise of Rowem, SBS Medianet and InVision Woojung, is scheduled to be made accessible through Rowem's StarPass, an app marketed at K-Pop fans around the world, on the 22nd of this month. Partnered with a number of key players in the Korean music broadcasting industry, StarPass by Rowem is a platform that allows K-Pop fans around the world to show their support of their favorite stars in a number of ways. International fans of K-Pop in more than 184 countries will be able to vote for their favorite K-Pop stars and take part in various reward programs. StarPass’s voting feature uses Rowem's patented technology and has been recognized for its innovation and transparency.

On the 22nd, SBS Medianet, Rowem, and InVision Woojung signed a strategic agreement to cooperate domestically and internationally in \"global K-lifestyle media commerce\" projects with a focus on the three companies' specialties, broadcast content, and the mobile platform. On the same day, it was also hinted that StarPass was up for a multi-stage revamp. To mark the beginning of this collaboration, the pre-voting and real-time voting service for the SBS Medianet-broadcast The Show and the Trot Show will be provided through StarPass. A number of content-based services designed to promote communication between featured artists and their fans is scheduled for release.

Fans around the world can use the services provided through StarPass for real-time participation while watching SBS Medianet's music shows. It was announced that an impending service update will release a wide range of high-quality K-Pop content to global fans. SBS Medianet is further expanding its global broadcasting network to cover Russia and Europe. In addition to Japanese broadcaster TBS and 15 regions served by MTV Asia, 4 regions will be served by MTV Russia and 65 regions by MTV Hits France, for a total of 86 regions with access to SBS Medianet's broadcast content. InVision Woojung has its sights set on expanding K-content business in partnership with Korean and foreign broadcasters through this expanded global network.

Other new and exciting StarPass features that its users can expect include a voting service for sports fans that view SBS Medianet's digital content, live streaming content for global K-Pop fans, and a VOD service. The vision is to create a "one-stop media commerce service platform" for supplying the global market with a complete K-lifestyle package that includes food, fashion, beauty, health, and sports.