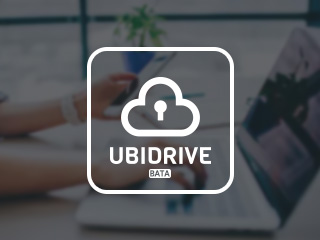 The beta version of UBIDRIVE can be downloaded at android app stores including Google Play and Naver Software.

UBIDRIVE allows or restricts access to file folders on a user’s PC depending on the proximity of the user’s smartphone, and file folders automatically appear on the screen or disappear.

One of its notable features is users’ security experience optimized for mobile environment. As the use of smartphone becomes prevalent around the world, they are becoming an essential item for identification in our daily life. UBIDRIVE uses smartphone as a kind of remote control to safely store and manage files on PC, ensuring both security and convenience. Once a user decides a setting for WiFi, AGPS and security distance, the application makes file folders to appear and disappear accordingly depending on the user’s proximity, adding elements of fun. Users can manually select folders to be visible or invisible on the PC screen.

Files stored in UBIDRIVE are encoded with 16 random numbers that are unknown even to users, providing another layer of security. The secured files can only be accessed and decoded with the user’s smartphone. Other features include: safety editing for automatic decoding and recoding of files, fast encoding for large video files (500MB and up quick and easy decoding and execution with a double click.

“UBIDRIVE ensures powerful security, excellent functions, easy use and fun experiences, and strengthens sense of security for PC and smartphone users. It will substantially change the culture of privacy protection. By controlling information security with an essential personal item, people can have a secret place and have a safer and more enjoyable mobile life everywhere” said CEO Ahn Taeho.

Following the free beta version, the company plans to launch an official version operable on android, iOS and Windows during the first half of 2017, along with Cloud service.